Does it Measure up? A digital scale review


It’s mid-afternoon and you really want a snack. You have many options, one of which is something in a bag which requires you to pull out “a serving” that equals 8g of carbs. If that serving is “approx. 15 pieces”, how many of you actually count the pieces? Yeah, I didn’t think so. Neither do I. I just reach in and grab a handful and hope for the best. The thing is, I discovered long ago that my eyeballs need to be recalibrated because what I think is ¼ cup is more like ½ cup. It would be so much better, and smarter, to make certain that I’m getting the correct portion. Now I can.

I have also found, more and more, that low carb recipe blogs often list the ingredients in grams instead of cups because they say that measuring things like almond and coconut flour is more accurate that way. I haven’t been able to do that, until now.

I was recently given the opportunity to try out the Simple Health Global digital scale seen here. 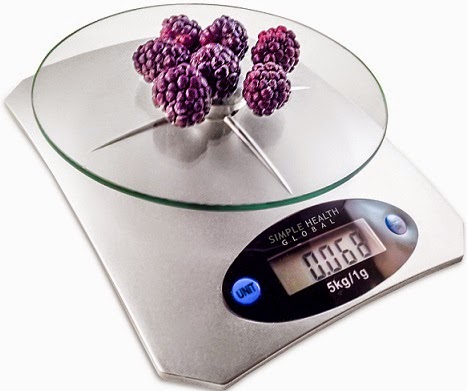 This digital scale is sleek in design and easy to use. One of my pet peeves is buying a gadget and finding that the instructions are incomplete, leaving me with questions. This scale came with just 1 two-sided piece of paper for instructions, but that’s all I needed! In fact, I probably could have figured it out without the instructions. Simple!

It’s small, which is really important in my miniscule kitchen. I had no trouble figuring out where to store this. The weighing platform is made of glass and will unscrew from the unit for easy cleaning.

The unit has a tare function which allows you to use a container for weighing your food without having to worry about how much the container weighs. You place your container on the platform and when you click the tare button it resets to zero. Now you can add your food and know exactly how much it weighs. (I tested this function and it works perfectly!) It will weigh grams, ounces or pounds.

I had planned to give you a list of pros and cons but there really isn’t much to say in the negative about this scale. I only have one minor “complaint”: The unit of measurement indicator is very, very tiny; just to the right of the numbers. My old eyes can’t read it but once I figured out that 0 is grams, 0.00 is oz. and 00.00 is lbs. it stopped being an issue.

If you’re in the market for a digital kitchen scale, I would recommend this one. It’s small, accurate, elegant and affordable. The nice folks at Simple Health Global have offered a discount for my readers. You can find the scale here, at Amazon. Use this code  CORNELL9  when checking out for a 10% discount. (Please note: I will not receive any compensation for sales. I am just reviewing the scale.)

I’m very pleased with this new addition to my kitchen and I know that my attempts to control my diabetes will be that much better because of it.

Disclaimer: I received this scale at no cost from the folks at Simple Health Global in return for a review on my blog. My words and opinions are my own and were not swayed by this gift.)
Posted by Kate Cornell at 9:54 AM 2 comments


There’s a guy who says he controls his type 2 diabetes by shunning trans fats and eating a handful of walnuts every day. Good for him. That isn’t me.

Some people with diabetes swear that adding cinnamon to their daily lives helps them to maintain healthier blood glucose readings. Bravo! That isn’t me.

A lot of PWD maintain that they can eat anything they want, in moderation, and still control their diabetes. Lucky ducks. That isn’t me.

If you believe the media hype, type 2 diabetes can “go away” if you only do this, that or something else. That isn’t true for me.

Whole grains are healthy and should be part of everyone’s diet. That doesn’t work for me.

There are people who say, loudly, that diabetes is easy to control, that the lifestyle changes that are necessary aren’t difficult, that it’s a breeze. That isn’t me nor have I found that to be true.

So-called experts and PWD who have “seen the light” will happily tell you how you’re doing it wrong and that they know the way. That isn’t me.

There are so many morbidly obese people in our society and some people feel that it’s their own fault and that is what causes type 2 diabetes. That isn’t me.

Some people only do what their doctor tells them they should be doing without researching on their own or questioning a health plan that might not work for them. That definitely isn’t me.

I’m someone who has made drastic changes to my lifestyle over many years.

I’m someone who has very specific ideas on how people should be eating to maintain health and am leaning heavily toward the idea that food can be medicine.

I’m someone who won’t cram those ideas down anyone’s throat, although I may talk about them here. It is my blog, after all.

I’m someone who has grand ideas but doesn’t always know how to make those ideas reality.

I’m someone who aches for people with diabetes and wishes that it wasn’t so hard.

I’m normal, mostly. I’m nothing special, except to my family. I’m a person with diabetes who is tired of reading all the misinformation, myths and contradicting information that can be found online and in publications. I’m tired of the media and companies preying on people who need help.

Mostly, I’m tired of the medical society lumping all people with diabetes into one big bunch, thinking that one way; one food plan; one method will work for us all. I call bullshit.

Everyone is unique. Everyone lives their lives the way that works best for them. What makes anyone think that, just because we have diabetes, we should all be doing the same thing to control the beast? We’re individuals whether we have diabetes or not.

If I could have just one wish for 2015 (that didn’t involve a cure) it would be that people with diabetes would pay attention, take action and learn the best way to control their diabetes. I wish for a more informed, proactive community of people who are living wonderful lives, despite their diabetes.
Posted by Kate Cornell at 1:30 PM 6 comments


I resolve to not make New Year’s resolutions. (See what I did there?) I have, however, been doing some thinking lately about what I’d like to see in my life during 2015. It’s no secret that 2014 was a difficult year for me. Looking back, it wasn’t awful, just not the best. The issues that I’ve been dealing with have caused me to be more introspective than normal. I have felt a sense of disconnect and restlessness lately. I want to fix that.

I’ve recently read some about mindful eating. In fact, the subject has popped in front of me enough that it makes me wonder if some cosmic goofball is messing with me. I like the idea of mindful eating. Basically, you only eat when you’re actually hungry instead of regularly like we’ve all learned to do. I’m willing to give it a try. I hope it works with my diabetes. I’m also hoping that my mindfulness will help me to keep from eating mindlessly. That definitely needs to stop.

I also have a desire to step away from social media a bit more and spend more time in my world. I believe that my feelings of disconnect stem from spending too much time in the “out there” and not enough time in my real life. It’s not going to be easy because I have made so many awesome connections online through the DOC. I will work on making things more balanced. The sucky thing is that you can’t surf the net and only find the things that are pleasant. Too many things upset me, of late, and I need to step back in order to keep from becoming depressed. I have no intention of hiding my head in the sand, I just need to be more protective.

So here’s to a more mindful year. I’m hopeful that things will improve for me and I wish nothing but the best for each and every one of you. Let’s make this year a stellar one, shall we?
Posted by Kate Cornell at 3:52 PM 2 comments