I realized today that I haven’t been posting very often lately.  That doesn’t mean that I haven’t been thinking about my diabetes or planning posts, it just means I’ve been busy with other writing projects and…well, life!  I have been anticipating today’s post for some time.  I couldn’t write to tell you about my cooking adventures until I had a chance to actually do the cooking.  I’m silly like that.  Today I want to tell you about my latest low-carb finds that have gone a long way to making life more comfortable.

I miss sandwiches.  I miss cereal.  Since I wanted those things back I spent some time searching out bread and cereal options.  I wrote here about the fact that I thought I had found my go-to low carb bread.  I was wrong.  You see, I liked that almond bread just fine but it was still too dense for my liking and was sometimes difficult to swallow if I took too large of a bite.  Not optimum.  I stumbled upon this new recipe and it is a qualified hit!

You can find the original recipe here.

I followed the recipe exactly the first time and mostly liked the bread but was somewhat turned off by the odor and taste coming from the marsala wine.  It was just too strong for my liking.  She mentions that you can try using buttermilk instead so my next attempt I did just that.  Voila!  This bread is light and moist.  It’s a bit spongy but holds together nicely for a sandwich.  I usually toast it first.  It doesn’t brown up a lot but the toasting adds a little firmness.  According to her website the bread has 4 gr of carbs and 3 gr of fiber per slice.  All I know is that I can eat a sandwich now without having blood sugar spikes, and that’s a win! A sandwich made with 2 slices equals about a ½ sandwich when made with traditional bread.  It’s enough for me. 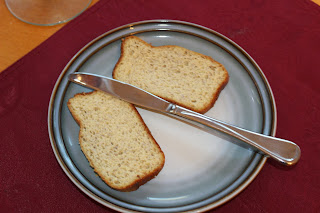 As I said above, I also miss eating cereal.  I had a hankering for a granola-like product so I searched and found this:  Almond flour granola bars.  Right up my alley!  I first made the bars and later made some changes to make “cereal”.  Since I adapted her recipe enough I’ll give it to you below.

½ cup peanut butter (I use the natural variety.  Almond butter would also work if you don’t like the taste of peanut butter.  It’s pricey though.)
¼ cup honey (more on this later)
1 large egg
1 cup almond flour
½ cup chopped walnuts
¼ cup sliced almonds
¼ cup sunflower seeds (the seeds I bought were salted so I omitted the salt from the recipe.  If your seeds are unsalted, add ¼ tsp salt in the first step.)
¼ cup flaxseed meal

In a large bowl, stir together the almond flour, nuts, and flaxseed meal. Pour the nut butter mixture into the almond flour mixture and stir until combined.
Press mixture evenly into prepared baking pan and bake for 18 to 20 minutes, until golden brown around edges. Cool before cutting into bars.

These bars are soft, almost like a cookie.  You can substitute any type of nut you like, but I would recommend keeping the volume the same.

About the honey: I tried the recipe with honey and then the next time I switched out ½ of the honey and replaced it with sugar free maple syrup.  ie: 1/8 cup honey and 1/8 cup syrup.  Either way works and neither of them spiked my glucose (provided I didn’t pig out on it).  Here are the numbers based on 9 bars:  with honey: 15 gr carbs and 3 gr. fiber.  With half honey/half syrup: 11 gr carbs and 3 gr. fiber.  You could even ditch the honey all together and just use syrup to get 7 gr carb per square but I’ve been trying to incorporate “real food” into my cooking more and more.  I find that I can tolerate small amounts of things like honey.  The trick is not to overdo it.  AND REMEMBER: things may (and probably will) be different for you.

Now for the cereal option.  I found a technique that I applied to the recipe above.  Instead of baking it in an 8X8 pan, I spread it out on a cookie sheet.  Preheat the oven to 300 degrees.  Line the pan with parchment paper and spray it with cooking spray.  Place the mixture in a circle, leaving the middle of the pan open.  See below: 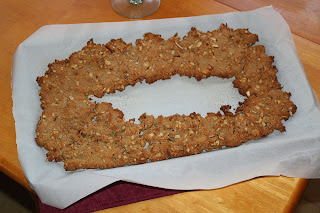 Bake for 25 minutes. Cover with another piece of parchment and bake for another 15 minutes.  This can be broken up into small pieces, tossed in a bowl with milk (I use almond) and you have cereal!  It’s not crunchy but it’s good.  Next time I may try 4 lines of mixture on the pan to see if the crunch factor increases.  Be careful to not burn it.  Burnt almond flour isn’t exactly appetizing and it’s too expensive to waste.

These two additions to my food plan have gone a long, LONG way to making me happier with my food choices.  I can’t tell you how nice it is to make a sandwich again.  I hope you find this information helpful.

It seems simple; it’s not easy


My journey with diabetes has been a mix of highs and lows; both emotionally and blood sugar-wise.  This journey has taken me from total ignorance/naivety, through over confidence and feelings of defeat, right up to today when it feels as if I’ve researched SO much about diabetes and nutrition that my head is swimming and I just want out of the pool.  These days I’m feeling extra frustrated because, living with type 2 diabetes seems so simple when looked at objectively but it’s far from that, isn’t it.

My research and testing have brought me to the conclusion that I need to shun many foods that are part and parcel of the standard American diet.  Sometimes that makes me sad and pouty; wishing for things that I can no longer eat.  Those types of feelings cause me to wish for things like insulin (as I wrote about here).  In reality, I’m just fine most of the time when I’m here at home.  It’s when I go out to eat with friends that I find myself longing for the “old days”.

Eating a more healthy diet, one that has more fresh foods than processed, takes a lot of work!  I have to face the reality that, when it comes to cooking, I’m rather lazy.  I usually want it fast, simple and yummy.  Those three things don’t necessarily go along with fresh and healthy.  That’s not to say that you can’t have fast and simple, it just means you have to plan ahead.  That takes me back to the fact that I can be lazy…vicious circle.

This brings me to my latest challenge: do what I need to do in order to eat a healthier diet, easily.  Sounds simple; it’s not easy.  This new project will take discipline on my part.  It doesn’t require willpower, which is something that rarely works.  It will require discipline.  I can be disciplined!  I can!  I went grocery shopping this morning and tried to purchase items that will make it easier to reach for healthier foods.  I also found myself comparing cans of beans to see which would be better: lower sodium or more fiber.  It dawned on me that I’m an idiot!  (kinda embarrassing when you have this type of revelation in the grocery store; especially when you voice it out loud <sheepish grin>).  The reason I’m an idiot is that I know how to cook beans “from scratch”.  It’s not like its difficult…but it takes time and planning.  So, I bought a couple of packages of dried beans and they’re soaking as I type.  I bought a bunch of kale to make chips.  Yesterday, I made low carb granola bars.  I’m experimenting with almond flour bread.  I am determined to find a way of eating that is healthier as well as more blood glucose friendly.

This is not an unreachable goal. I know I can do this. I need to remember that my health (and Ray’s too) is far more important that the momentary bliss I can get from eating something that I know isn’t good for me.  You can do this too.  Regardless of your food plan, you know in your heart that there are changes you can make to improve your overall health.  Yes, you can.  Here’s hoping that we can all be successful.  Now, I’m off to make kale chips.  Yum!
Posted by Kate Cornell at 12:28 PM 4 comments