This post is mostly directed to those of us with type 2 who don’t use insulin.  I completely understand that people who use fast-acting insulin have the ability to adjust their insulin to meet the carb load.  However, I also feel that it would be in the best interest of all people with diabetes to reduce their carb intake.  Remember, I’m not a doctor.

I have very specific ideas about what I can and will eat to control my diabetes.  Repeat my diabetes.  Because of this, I often get cranky when I read some of the recommendations touted by reputable websites about what people with diabetes should be eating.  The thing that makes me cranky is the boatload of carbs being recommended.  1 cup 1% milk, 1 orange, medium and 1 1/2 cups Cheerios cereal for breakfast?  Really?? That would send my blood glucose through the roof!  The same thing goes for “diabetes friendly” recipes that show the serving size is the size of a postage stamp.  Let’s get real; no one would eat just 1 serving.

I still get emotional about this when I see it online but I’ve recently had a change of heart, to some degree.  (I think this comes from starting the support group here in my town.)  The reality is that some people who are newly diagnosed have been used to eating upwards of 200 grams of carbohydrates per meal and the idea that they can miraculously reduce that carb intake to 35 grams is ludicrous at best.

This epiphany has gotten me to thinking that it makes sense to recommend a carb intake of 200 grams of carbs per day to a newly diagnosed person who is used to eating much, much more than that.  However, I think “the system” falls horribly short after that.  A food plan that includes that many carbs should not be “the new way of life” but should be considered a transitional food plan.  I feel that the nutritional community isn’t doing our rapidly growing diabetes community any good by continuing to recommend whole grains and other carb-heavy foods in the quantities that they do.  There should be a step-down program.  Patients should be encouraged to wean themselves from unhealthy amounts of carbohydrates over a period of time until they are consuming an amount that agrees with their meter.  They should replace those carbs with healthier choices like lots of vegetables and lean meats.

Asking someone to dramatically change their way of eating overnight isn’t a good thing to do, in my opinion.  However, I think it’s also harmful to let people assume that it’s ok to go on eating at that carb level when their meters don’t agree.  I think our education of people with diabetes is sorely lacking and needs a major overhaul.

I understand things a bit better now but I think there is much more work to be done.  People need to be made aware of the importance of eating a healthy diet and I think our country’s idea of a healthy diet needs tweaking.  I wish I could make the world understand how important it is to reduce carb intake in order to attempt to control diabetes and help keep it at bay.  I can’t.  I’m just one person, but I’m a person with a voice and I intend to use it any way I can.  I feel more letters to politicians coming in my future.
Posted by Kate Cornell at 7:28 AM 16 comments

Spare a Rose, Save a Child 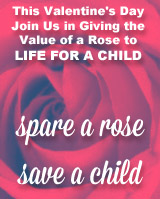 Some wonderful Diabetes Advocates have come up with a plan, with the help of some folks at Johnson & Johnson, to raise some money for the Life for a Child program, sponsored by the International Diabetes Federation.  This program aims to take “contributions from donors [to] go to established diabetes centers enabling them to provide the ongoing clinical care and diabetes education these children need to stay alive.”  Important stuff!!

Here’s the deal: When you buy roses for your sweetie this Valentine’s Day, buy one less and donate the money you save to this worthy cause.  Heck, you don’t have to be a rose purchaser to participate.  Just go and make a donation here!  According to the IDF’s website:

Just $1 a day provides a child with:

So, if you donate just $5 you will be helping a child for a week or 5 children for a day!  It’s amazing what just a bit of money can do to make a difference.  C’mon…do it.  You know you want to.
Posted by Kate Cornell at 9:20 AM 3 comments

It’s not the money, it’s the time


Healthy eating:  Less junk; more real food.  Whole foods vs processed foods.  Portion control.  We all know that eating junk food and highly processed foods aren’t good for us.  We all know that we should be eating more whole foods: fresh vegetables, whole grains (if you eat grains), lean meats etc.  We all know that, right?  (Hmmm, maybe we ALL don’t know that, which is the subject for another post).  I often hear, and sometimes say, that eating in a healthy way is more expensive than eating processed foods.  While it’s true that you can buy tons of cheap carbs, that doesn’t mean that healthful, mindful eating is expensive.  I’ve come to the conclusion that the thing that keeps people from eating in a healthy way has a lot more to do with the time involved than the cost of the food.

I like to cook…when I feel like it.  There are many times when I don’t feel like it.  At those times I tend to look for the easiest foods to prepare; easy often means more processed foods.  I know in my heart that I did this quite often when preparing meals for my family.  Feeding 4 kids means lots of food and being a working mom means less time and more weariness.  I do a better job now since there are just the two of us to feed and I’m mostly retired.  That doesn’t mean that there aren’t times when I just whine about having to make dinner (just ask Ray).  That’s when I whip up something easy (or order take-out.  Shhh…don’t tell anyone.).

I go through phases, don’t we all?  Sometimes I get all “I’m only going to prepare healthy foods and never again use a box or prepared food” and other times I’m Miss “Screw it.  I’m heating up something easy.”  In reality I need to be a nice mix of both.  I’m smart enough to know that I won’t ever be a totally healthy eater.  I need to be realistic while doing my best to lean toward the first tendency more, and the “Screw it.” tendency less.

Eating healthier foods means more preparation.  You can pop a frozen meal of chicken and vegetables in a nice sauce into the microwave and be eating in 3 minutes, but that’s not healthy.  In order to eat the same meal in a healthier way, it involves chopping vegetables, searing/sautéing/baking the chicken and standing over the stove to prepare the sauce.  That’s not exactly quick and easy but it’s oh-so-better for you.  So what are we supposed to do, we people who don’t always feel like cooking?

I like to make something we call “easy chili” on occasion.  It’s just a hamburger chili with bell peppers, onions, tomatoes and spices.  My local grocery store used to carry these awesome frozen bell pepper strips.  They were perfect for this meal and made the prep soooo quick and easy.  Well dang it, they quit carrying them.  Grrrr.  NOW, in order to fix my “easy chili” I have to chop fresh peppers and onions! Oh the horror!!  It occurred to me the other day that I can make my own frozen pepper strips.  I just need to spend a little time chopping lots of bell peppers and pop them into a freezer bag.  It takes a bit of time but it will save me tons of time later.  Problem solved.

Back in the day, I used to make Shake n Bake chicken.  We liked it.  It was moist and tender, but it had too much “stuff” in it that wasn’t good for us.  Now I make Almond-crusted baked chicken which is even tastier, much lower in carbs and infinitely healthier.  Instead of throwing chicken into a bag and shaking it up, I dirty a couple of dishes and use egg/milk mixture and almond flour for dredging (with some chopped almonds for texture).  I can flavor the almond flour with different spices but our favorite is a wee bit of salt and some fresh rosemary.  It’s a bit more work but we’re eating healthier and it tastes great!

Who says we can’t have frozen dinners that are quick and easy to heat and eat?  If I plan ahead and make a double batch of something we enjoy eating, I can freeze portions in my handy Rubbermaid containers for future meals!  I will admit that I’m not great at consistently doing this, but it’s so doable!

I buy boneless, skinless chicken breasts by the flat at Sam’s Club and freeze dinner-sized portions.  It’s cheap.  Sometimes I’ll take those chicken breasts and chop them up for a casserole.  This week I chopped some of the chicken breasts BEFORE I froze them.  Now I have little bags of prepared chicken for my casserole.

Salads.  I love salads but I suck at taking the time to actually make them with all the goodies I enjoy.  Someone posted a video on Facebook for making salads ahead and it’s a really cool idea.  All you do is take a mason jar, or any other jar that has a screw-on lid, and place your salad ingredients in as follows: dressing in the bottom, layer chopped veggies, meat, cheese and whatever other toppings you would put on your salad, and the greens on the top.  You can seal the jars if you want (see Youtube for instructions.  Just search for salad in a jar.)  These will keep in the fridge for about a week.  When ready to eat, just shake the jar vigorously and pour it into a bowl.  Voila!!  I am totally going to start doing this…once I can find some jars.  Everyone is sold out!

I have some friends who used to spend every Sunday preparing meals for the entire week.  I always thought that was so cool and smart and I wanted to be just like them.  I will never be that organized, but I can do the things I mention above.  There are other ways to plan ahead that will make it easier to eat healthier but these are just a few ideas.  Spending a little time preparing the ingredients in advance will make it more likely that I will eat healthier foods.  If I can do it, so can you.
Posted by Kate Cornell at 12:37 PM 3 comments