Where do I begin?  I have so much to tell you about but this post will just give you the highlights.  I attended the TCOYD conference in San Diego this past weekend.  TCOYD is Taking Control of Your Diabetes and is the brainchild of Dr. Steven Edelman who is an Endocrinologist and also lives with type 1.  I have never attended a conference about diabetes and I think I picked a gem for my first endeavor.  It. Was. Awesome!  (I need to think about more creative ways to describe awesomeness in my blog because I seem to be using awesome quite a bit.  But hey, it WAS awesome!)

Ray and I drove to California on Friday and stayed with my sister and her family.  We left at 6:30 AM on Saturday and began our 2 hour journey to San Diego.  (Ray planned to spend the day at the harbor taking pictures of the ships etc.  He is an aweso…fantastic amateur photographer.)  I was there early enough that there wasn’t much of a crowd which surprised me.  I found a seat and it didn’t take long before the room began to fill up.  It was packed by the time the event began. 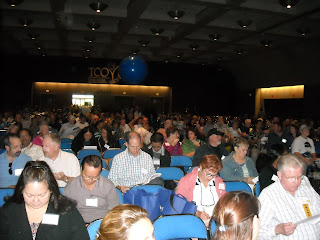 Dr. Edelman’s reason for starting TCOYD came from the fact that only 5% of the time spent in medical school covers diabetes education.  That’s right, most doctors only receive a small portion of their education learning about diabetes.  That combined with the fact that things are always changing explains why so many primary care physicians lack knowledge about the best way to treat those of us who have diabetes.  Eye opening.  He charged us with taking care of ourselves; we have the main responsibility to control our diabetes.  (I knew that but so many people don’t!)  He was also sure to tell all of us that diabetes does not lead to complications; poorly controlled diabetes does.  That is an important thing for all of us to remember!

William Polonsky, PhD, CDE spoke to us as well.  He is an author and is founder and president of Behavioral Diabetes Institute.  (He’s the “touchy-feely” guy.)  The thing that he said that stayed with me is that we need to take action to control our diabetes.  The best way to do that is to take action to start something, not to stop something.  What does that mean?  It’s a change in focus.  If we have behaviors or habits that need to be changed, then we should focus on something we can do instead of something we should stop.  It’s a way to stay positive and not dwell on negative things.  Instead of telling ourselves that we should stop eating so much junk food, we should tell ourselves that we should start eating healthier foods.  It’s all about focus.

The day was split into tracks for type 1 and type 2 folks so we could receive information that focuses on our own situation.  We were free to attend anything we wanted but someone who doesn’t use insulin doesn’t need to hear about pumps and someone with type 1 doesn’t want to hear about what to do if you’re at risk of developing type 2.

Bobby Deen was there to show us how to make the gumbo we had for lunch.  He talked about how we should “eat the rainbow”, adding more colorful foods to our diet.  He is also a big advocate of fresh foods and avoiding processed foods.  (Agree!!)  He said, “If we didn’t have it in 1910, we shouldn’t be eating it today.”  I’m not sure I agree with that 100% but it does make you think, doesn’t it?

The health fair was full of booths selling stuff, educating and encouraging us to take control.  Zumba classes, chair dancing, personal trainers, roving CDE’s, carb education and a booth with endocrinologists who were available to answer our questions.  There was also a booth for the Diabetes Advocates!  Guess who I met? 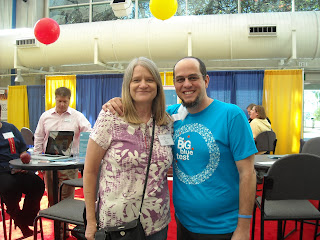 Manny Hernandez, founder of TuDiabetes and the Big Blue Test, is an amazing guy.  Not only is he someone who has diabetes, but he is someone who is making a difference in the world for the rest of us who deal with diabetes as well.  I was so pleased to have met him and have a chance to chat.

Crystal Bowersox, an entertainer who has type 1, was there to entertain us.  I thought I had video of her singing but it didn’t turn out.  She’s a talented young lady!

I could go on and on and on about this event and how much I loved it.  I have so many ideas floating around in my brain and I’ll be blogging about them separately, soon.  I loved being surrounded by people with diabetes.  The luncheon we had gave me a chance to visit with others.


The entire focus of this day was on diabetes and how we can live wonderful lives despite it.  Dr. Edelman said it best, “How many people spend a whole day concerned about improving their health?”  Yup, we are awesome!
Posted by Kate Cornell at 11:23 AM 3 comments

Walking for the greater good


Yesterday ranks right up there as one of my best days with diabetes.  It’s not because I had stellar glucose numbers or managed to stay away from foods that I shouldn’t eat (although both of those things happened).  What made yesterday so great is the feeling I had of doing something positive and helpful for the diabetes community as a whole.  I walked, for the first time, in the American Diabetes Association’s Walk to Stop Diabetes.  It. Was. AWESOME!

My alarm woke me at 5:30 AM, which is rough for this retired chicky, and I was on the road by 6:30.  I had to drive about 1 ½ hours to get to the event.  I registered and got my Red Strider hat (a Red Strider is someone who walks and has diabetes) and some other freebies then stood around waiting.  I didn’t know a soul and was planning to walk alone.  While we were waiting for the event to begin I struck up a conversation with another woman.  She was also walking alone so we decided to walk together.  She was there because she knew someone who was involved and decided to come at the last minute.  In the sea of heads preparing to walk, very few were wearing red hats.  That means that the majority of people who were there were there to support the fight against diabetes even though they aren’t personally affected by the disease.  I think that’s so cool.

The weather was fabulous and the planned route, while not difficult, was hilly enough to be a challenge.  We took off and got to know each other a bit as we walked.  My companion had to leave early so we parted and I continued to walk alone.  Along the way I spoke briefly with some of the other walkers.  It felt good to be out there walking among others who are passionate enough about fighting diabetes to give up their Saturday morning. 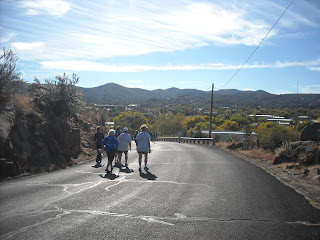 I walked FAST!  Since I didn’t have anyone to chit-chat with for most of the walk I just trucked on.  I actually felt an obligation to kick this walk’s butt, not because walking faster or longer would bring in more money, but because I have diabetes.  There I was wearing my bright red hat.  Anyone who saw me knew that I have diabetes.  It occurred to me that I wanted to be seen as someone who is healthy and active and able to truck on up those hills despite the fact that I have diabetes.  It’s not that I felt that people were watching me, per se, but I really wanted to be a shining example of someone with diabetes.  Besides, if there was an elderly person ahead of me, and there were a few, I couldn’t let them beat me!  Ha!  Near the end of the walk I found myself beside a woman who is a bit older than I am.  She made some comment about running past the last rest station, making it look like we’d run the whole way.  I looked at her and said, “let’s do it!”  We broke into a jog and passed the table with the cheering volunteers.  Woo hoo!!! 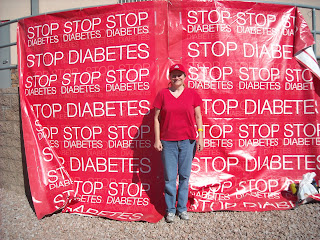 At the end of the walk we were treated to breakfast and some raffle stuff.  I made a point of introducing myself to the organizer because I wanted to make some contacts that might be willing to speak to my support group.  She introduced me to someone who introduced me to someone else and the next thing I knew, I was standing in a circle with one of the honchos from the Phoenix ADA and a family from Flagstaff whose son has T1 and are very passionate about diabetes education.  The upshot was that we may be able to organize a walk in Flagstaff in the future, which is a community that is only 30 minutes from my home!  I also handed out several of my “business cards” for my blog and am hopeful that I will be able to get some speakers to come to our support group meetings in the future. 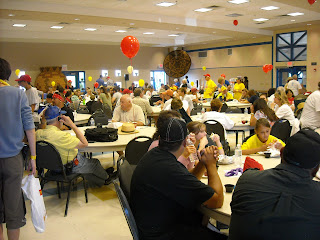 Did I mention that: It. Was. AWESOME!!?  All day yesterday, sore legs and all, I had such a feeling of accomplishment and do-goodness.  I managed to raise $628 all by myself, which exceeded my $500 goal.  Next year I will return with a team.  I’m thinking healthy bake sales and contribution cans at each check-out line at the grocery store.  My mind is reeling with ideas of ways to bring in even more donations.  Next year I will again contribute to kicking diabetes’ butt.  There is no better feeling than doing something for the greater good.  I highly recommend that you try it sometime.