Yesterday, in an effort to reduce the carbs I’ve been eating and still eat some of my favorite foods, I experimented with some zucchini recipes that I’ve been eyeing. I thought I’d share my observations and results with you.

First, I miss pizza…A LOT.  As unhealthy as it is, I still crave Pizza Hut’s stuffed crust, veggie lover’s pizza.  MmmmMMMMmmmm.  All that carby/greasy goodness in the crust!  My mouth is actually watering while I type.  Even though I occasionally dream about pizza, I haven’t eaten any in a long, long time.  Today I made pizza with a zucchini crust.  I’ve heard about making a crust with cauliflower but I had never tried it, mostly because Ray doesn’t like cauliflower and I’d prefer to find something that we would both enjoy.  I followed this recipe to the letter.  Once I baked it for 15 minutes at 450 degrees, I added my sauce and toppings and cooked it for another 10 minutes at 425.  The pizza was too “soft” to pick up and eat so it was eaten with a fork.  I’m not complaining, it was yummy!!  Ray liked it too.  I think next time I make it, I will turn the crust over and put the toppings on the brown side and let the other side brown while the toppings cook.  That might fix the “gooiness” of the crust.  My glucose before eating was 111 and 1 ½ hours later it was 114 after eating about 1/3 of the pizza.  Score!  The entire crust only has 9 grams of carbs and there is no way I could eat more than I did.  In fact, I was stuffed but it tasted sooooo good!  This recipe is a complete success.  I will have pizza for breakfast tomorrow!  Double Score!! 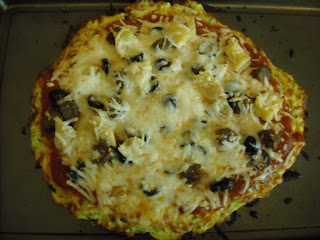 I fixed Ray something for dinner that I don’t normally eat so I decided to try out the other zucchini idea that I’ve read about.  I bought a julienne slicer and used it to make zucchini “pasta”, ie: using strips of zucchini in place of pasta.  I julienned 1 zucchini and placed it in my sauce along with 3 turkey meatballs.  Simmer and eat!  Pretty damn simple. My bg before eating was 100 (woot!!) and 1 ½ hours after eating it was 129.  I’ll take that any day of the week!  (Side note: it was the sauce that caused the increase this time.  I used the same sauce as I did on the pizza but, of course, I ate much more.  I have this same issue when I eat sauce on spaghetti squash.)  Did it taste like pasta?  No, silly people, it’s zucchini.  The thing is that the pasta is just a vehicle for the sauce, right?  This method worked just fine.  The texture was nice and I really enjoyed the meal.  In fact, I was stuffed all day.  I need to pare down the portions in the future.  If I was making this for more people I would sauté the zucchini in garlic-infused olive oil instead of heating it up in the sauce.  Just a couple of minutes should do the trick.  I wonder if I could use strips of zucchini in place of pasta in a lasagna…hmmmm.

All in all, I’m quite pleased with the Great Zucchini Experiment.  I just wish I had actually planted some squash this year.  :/  I hope you enjoy these meals as much as I did.  They are definitely now on my list of go-to foods. Bon Appetit!