I have returned from my Costa Rica adventures!  There is so much to tell; so many stories, sights and observations to share, but this blog is about my life with diabetes so I’ll save you from my version of the “vacation slide show”.  You’re welcome.  I must, however, share a picture of my son and his new bride just after they were married….on the beach….looking out at the Caribbean Sea…..in Costa Rica!! 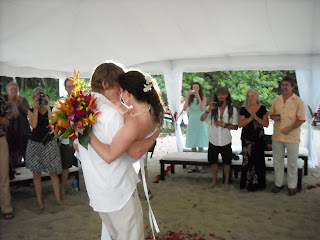 Aren’t they sweet?  So happy.  Beautiful wedding.
Ok….enough about that.
Costa Rica really is another world.  Being there was enough of an adjustment without throwing the whole “what will I eat” issue into it.  The first few days I realized that I was hardly eating at all.  I suppose that was due to the climate (85ish with 90% humidity, at least) and travel fatigue.  Our first foray into a grocery store was illuminating.  I realized that grocery shopping is usually pretty mindless.  However, shopping after traveling for 24 hours when you’re famished and all the labels are in Spanish is anything but mindless.  We settled on a small loaf of bread (that ended up being rather sweet), some ham, cheese, chips, mustard and mayo…..and beer.  Dinner was tiny little appetizer-sized sandwiches.  The next day, after some much needed sleep, we went into town (a 1 mile walk) and hit the “big” store.  Tuna.  Costa Rica has way too many different types of canned tuna.  I managed to figure out which was packed in water and bought several cans.  We bought ingredients for a spaghetti dinner, a frozen chicken, a few potatoes, bell peppers and some other random canned foods.  After paying roughly 13,500 colones for my half, we went home in a daze.  (Exactly how much did that tuna cost?)
Although we ate a few meals at the house we were renting, most of our dinners were eaten at local restaurants.  Rice and beans is a staple in Costa Rica and is served with pretty much every meal.  It was hard not to eat the whole serving but I did fairly well.  Arroz con Pollo….Yum!  Ceviche….YES!  The fish soup was delish.  Fish tacos on the beach.  I found a vegetarian plate at one place and ate falafel for the first time.  All in all the dining experience was both exciting and yummy.  I felt like an adventurer every time I ordered. I only had one meal that I regretted.  I ordered a pasta dish at one restaurant.  The plate consisted of a huge serving of pasta with a sauce.  No veggies, just a pile of carbs.  It was delicious but I ate the whole thing which, I’m sure, didn’t help my glucose.
At some point during the 12 days I was there, I stopped worrying about what I was going to eat.  I realized that there was no way I could find a meal that was completely diabetic friendly.  It was up to me to pick and choose and eat the best that I could.  Of course I could just stay “home” and cook for myself but who wants to do that when 60+ people were out there celebrating this union?  Besides, I couldn’t find a lot of the fresh foods I would normally buy at home.
I really missed salad.  I’m sure that there was a store somewhere that sold fresh produce but I didn’t have the energy to walk all over town looking for it (HUMID!!)  Besides that, we were warned about leafy veggies and germs.  I did not want Montezuma to revenge on me.  I did eat a couple of small salads in restaurants but they were a bit more upscale and I just dug in and hoped for the best.
So how were my glucose readings?  All over the map.  Early on I had a 199 completely out of nowhere.  Did I mention that I was suffering from a bad cold?  Besides that, the heat and humidity surely must have had some stress effect on my system.  Other times I had nice 1teen readings, I even saw a 99!  I diligently tested each morning and then again before we went out to eat so I could get a feel for how many carbs I could have.  Other than that I just didn’t think about it much.  After all it was only 12 days.  12 wonderful days with family and friends in an exotic place.
I walked…a lot!  It was about a mile into town and I went that route scores of times.  Sometimes we caught a taxi home because we were too tired or were concerned about theft.  (Petty theft is a very real problem there.  Touristas beware!)  I also spent a day on a whitewater rafting trip.  I paddled my little heart out!  18 miles with 40 class 3-4 rapids.  Amazing….simply amazing.  I definitely got plenty of exercise.
My advice to any type 2 folks who aren’t on insulin and are going to travel abroad: Relax and enjoy yourself!  Try the local foods.  Don’t be afraid that your bg will soar.  Sample but don’t stuff.  Traveling is about experiencing a different culture so do it!  I don’t regret a moment from this trip.  It was a wonderful adventure experienced with wonderful people.  Diabetes was on the trip but it certainly wasn’t in charge.  Pura Vida!
Posted by Kate Cornell at 11:41 AM